BEAUTIFUL BELIZE: TRAVEL TO DREAM ABOUT

The Caribbean nation of Belize has more than 200 islands, or “cayes,” which is pronounced like “keys.” Each one has its own unique personality that make exploring them such a fascinating and fun time. Belize is the only Central-American country whose official language is English (it used to be an English colony), so visitors from the US and Canada will have an easier time.

While many visitors are content to spend all of their time in the more heavily trafficked northern Cayes, such as Ambergris Caye and Caye Caulker, venturing to more distant, southern islands, such as Tobacco Caye, gets you closer to the eternal deserted-island fantasy. Getting to most of the country’s more “remote” cayes requires no more than a three-hour journey from Belize City.From the unsurpassed beaches of South Water Caye to the pulsating nightlife of San Pedro (on Ambergris Caye), the seven stunners pictured here offer the best in Belizean and Greece island hopping; simple and flexible.

In addition to having some of the finest stretches of white sand in Belize and near 180-degree sea views from anywhere on the island (all six hectares of it), South Water Caye is part of the South Water Caye Marine Reserve, the largest protected marine park in the country. With luxury cabanas and dozens of hammocks swaying among coconut palms, Pelican Resort (pictured in distance) is the perfect place to be lazy.

Eighteen kilometers (11 miles) off the coast from Placencia in southern Belize, tiny Laughingbird Caye is one of the most photogenic islands in the Caribbean. A national park with World Heritage Site and mini-atoll status, it’s a top choice among tour operators who bring divers and snorkelers with the best full face snorkel mask here to explore the caye’s unique coral formations. Picnic benches and grills make it an ideal barbecue spot, though overnight stays aren’t permitted.

About 40 kilometers (25 miles) off the coast from Placencia, Silk Caye is said to be the most photographed island in Belize. What it lacks in size it makes up for in diving and snorkeling, with marine life that includes stingrays, barracudas and lobsters. It’s not far from Laughingbird Caye, making it possible to visit both islands in the same day.

A national landmark and Belize’s first capital is a little-known getaway. A 20-minute water taxi hop from Belize City, St. George’s Caye is home to one luxury resort (St. George’s Caye Resort), which offers water sports from kayaking to diving to sitting by the pool. The rest of the island is lined with private villas and docks owned by affluent Belizeans and part-time residents. Celebrated nationwide on September 10, St. George’s Caye Day commemorates a 1798 battle in which British forces repelled a Spanish invasion.

Proximity to both the mainland and Barrier Reef, which is only a few hundred meters away, makes Ambergris Caye (the largest island in the country) the destination of more than 50 percent of Belize tourists. The primary town of San Pedro is the best party spot in the country. There are only a few good stretches of beach here, but many wonderful luxury resorts including Las Terrazas, Grand Colony Island Villas, and Ramon’s Village (to name a few!) The draw is the chance to hang with fellow travelers and sample the best of mestizo-influenced cuisin while puttering around the island on a rental golf cart.

Ambergris Caye’s laid-back neighbor and Belize’s second-most-visited island couldn’t be more different. More bicycles than golf carts cruise its sandy streets, reggae fills the air, and residents and visitors abide by the local “go slow” motto. Generally thought of as a backpacker’s haven, the island has only a handful of luxury hotels. It’s most popular among those seeking smaller crowds and an explicitly “Caribbean” vibe. 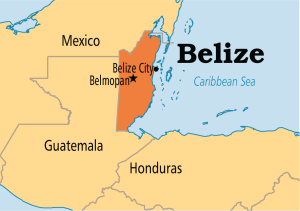