SMART BAGS ARE HOT FOR ALL THE WRONG REASONS

Remember The Jetsons, the animated family of the future with robots and flying cars?

When I saw a video recently of someone riding their suitcase like a scooter as it carried them across a room and in another image the suitcase was following its owner through a crowded airport, I was intrigued. “Surely this is some grand prototype of the future” I thought but it is indeed a reality now. It is the new smart bag. It is a George Jetson kind of reality.

These new smart bags use lithium ion batteries to link to an app, power an onboard GPS that tracks the luggage, charges your phone and similar devices, locks the bag, weighs the bag and some bags have the ability to move on their own. BUT therein is the problem. Many of these batteries can cause a fire. These are considered catastrophic fires, according to testing by the FAA, so hot and so intense in fact that the plane’s extinguishers would be unable to put it out. 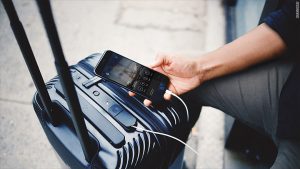 Airlines are lining up to ban the luggage due to these concerns. American Airlines was the first to ban the bags. American requires that the battery be removed and brought in the cabin with the passenger and if the battery cannot be removed, the bag will be rejected. Delta, United, Hawaiian, Alaska, Qantas, Virgin Australia and Southwest are announcing similar restrictions and most are implementing these changes as early as the 15th of January 2018.

The manufacturers of these bags such as Bluesmart stated that they researched and followed the guidelines of The Department of Transportation and the FAA but with the fire risk they will have to go back to the production drawing board.

For now it seems, until something changes, the only smart bags flying will be the ones with removable batteries and those approved by the individual carrier. It is important before you plan to travel with a smart bag that you contact the airline you will be travelling with to make sure that it is a bag accepted by them.

Travel smart…. And by all means TRAVEL!