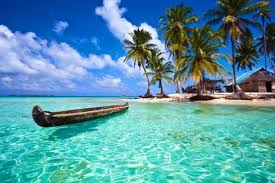 Handballed between various foreign powers for centuries, Pacific pipsqueak Palau is charting its own path through the uncertain waters of national independence. While the US still plays Big Daddy, Palau is its own master. In 2014 President Remengesau was named a ‘Champion of the Earth’ by the United Nations for strengthening the economic and environmental independence of Palau and creating a 100% marine sanctuary of its oceans. His message: ‘The environment is our economy. The economy is our environment.’

Collected behind a 110km barrier reef, more than 200 largely unspoiled limestone and volcanic islands – a mere eight are inhabited – are blanketed in tropical and mangrove forest and surrounded by waters teeming with marine life. Fairly constant temperatures and rainfall mean any time of the year is good to visit, although it becomes more typhoon-prone in the back half of the calendar.

Palau has as much to fear from rising sea levels and environmental degradation as any other Pacific nation, but it’s tackling those fears head-on, and is leading conservation efforts in the region. Such progressive thinking makes these islands a haven for diving and snorkeling (among the best in the world) as well as kayaking, sailing and wildlife watching. The secret is out in East Asia already, which means Palau is looking to limit the number of tourists it can host at a time.

Cutely dubbed an ‘underwater Serengeti’, Palau’s waters are stunningly diverse and it’s unquestionably one of the most magical underwater destinations in the world. Divers and snorkelers enjoy hundreds of species of fish and coral, sharks, dolphins, dugongs and turtles, all attracted by the confluence of nutritive currents that meets in this corner of the Pacific vastness.

If you prefer to stay above sea level, grab a trolley for kayaks and head to the ocean to kayak through the uninhabited archipelago of the Rock Islands. Almost alien in its beauty, it’s made up of 445 limestone formations swaddled with verdant green and fringed by reefs. Nearly 400 species of coral, the world’s highest concentration of marine lakes, the remains of now-vanished human habitation and the continuing discovery of new and endemic species led Unesco to list this as a World Heritage Site. If you enjoy fishing you can bring a kayak fish finder and spend your day fishing on the ocean.

In 1944, the Japanese and Americans fought for three desperate months for control of the island of Peleliu’s important airfield. The tragic result was over 10,000 Japanese and 2,000 American casualties, and an island paradise littered with wreckage. Today, many of the rusted tanks, planes, small arms and (highly dangerous) unexploded ordnance that attest to the ferocity of the struggle remain. Tourists, carefully shepherded by expert guides, are increasingly being drawn to this fascinating site, where you can even enter the cave networks left by the Japanese defenders, and find everyday artefacts left behind. This isn’t as ghoulish as it may sound: many of the visitors are here to pay respect to fallen relatives, and moves are afoot to preserve the site for its outstanding historical significance.

A 400% year-on-year increase in visitors from China in February 2015 put some noses out of joint in Palau and resulted in a reduction in flights scheduled from China. Palau’s pristine environment makes it a popular destination for the Chinese, Korean and Japanese jet set, but locals have complained about a lack of environmental awareness threatening their precious assets.

Jellyfish Lake is an otherworldly lagoon on the uninhabited limestone Rock Island of Eil Malk. Millions of an endemic sub-species of golden jellyfish drift across the marine lake in an east-west migratory pattern that’s repeated every day. Such is the sensitivity of the lake that visitors must obtain a permit, but snorkeling with these harmless, highly photogenic jellyfish is a once-in-a-lifetime experience.