THE FELLOWSHIP OF TRAVEL

It was early on a hot July morning as I checked in for my flight to Orlando. Surprisingly, the plane wasn’t as full as I would have imagined for a summer trip to Florida. I boarded toward the last and since it was open seating, I thought for sure that I would land in the seat least desirable to all the others who went before me. I passed seats toward the front of the aircraft, generally my choice, to land on the very back row and on an aisle. “This is not what I would have chosen” I thought to myself but was determined to make the best of it. Two people followed after me and sat a couple of rows up leaving the seat empty between myself and the gentleman in the window seat. He looked up from what he was reading and we politely said hello and then we both drifted into the haze of announcements and explanations about what to do should the aircraft do the unthinkable.

When the plane was up in the air, I made a random comment about the to the man I shared the row with. I don’t even remember what it was now, but he smiled at me and for the two hours that we were airborne, we had the most amazing conversation about life and purpose. Then to our surprise, we had a multitude of mutual friends and interests and at some point we realized that our paths had crossed prior to this meeting. The hours flew by on that flight and to this day I count that conversation as pivotal as it was that encouraging, that enlightening.   Now, 15 years later, I am still friends with Dusty and he is still that vibrant force of nature.

Now as an aside I will say it has not always been that way. I have met up with some of the grumpiest people and some of the oddest sitting in an airplane, but then there are those pretty great times too. Like when I sat next to the parents of Major League Baseball Pitcher David Price on the way to Cleveland. They were going to see their son pitch for the Tampa Bay Devil Rays against the Indians and I was going to hear my best friend sing the National Anthem for the same game. Or the time I sat next to a member of the military headed home to see his family for the first time in a couple of years. Then the gift of sitting in the middle of a Broadway on Tour cast for 12 Angry Men as they made their way to a run of shows that I just so happened to be attending that week. The list and stories could go on, but that is what I mean about the “Fellowship of Travel” and what a LIFE experience it can be.

It still amazes me how things fit and fall into place. Here you are, travelling to where you are travelling and somehow a group of people have chosen the very same destination at the same time. It amazes me. I want to know where they are going and why and I try to imagine their lives outside of that moment. Like the young family who has saved money to take their overly excited (and loud) children to Disney or that church group that was headed for a mission’s trip or the daughter headed home from college. Although we are all different and travelling for various reasons, there suddenly becomes a common link between us, a common experience of sharing space for a brief moment in time. It becomes an interaction and sometimes a transaction and exchange of something lasting. In that moment I realize that we are all sojourners in this life and there is really nothing random about any of it.

That is why I encourage people to travel or to spread wings out beyond what is common to them, beyond what is every day. I tell people to make lists, a bucket list of sorts, and to start checking it off as you go. Life is short and the next moment is never a guaranteed venture, so live life now.

Travel is a fascinating way to learn about yourself and a lot about other people. The world is waiting and whether you are flying to Montana or Mozambique just get out there and GO. Stir it up… Shake it up… Live it up.

Find the fellowship of travel for yourself. It is an amazing adventure. 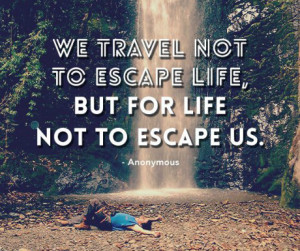